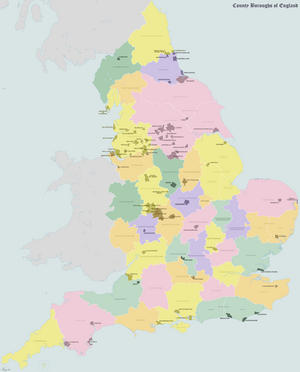 County boroughs in England in 1973 (darker colours)
County borough is a term introduced in 1889 in the United Kingdom (excluding Scotland), to refer to a borough or a city independent of county council control.

When county councils were created in 1889, it was decided that to let them have authority over large towns or cities would be impractical, and so any large incorporated place would have the right to be a county borough, and thus independent from the administrative county it would otherwise come under. Some cities and towns were already independent counties corporate, and most were to become county boroughs. Originally ten county boroughs were proposed; Bristol, Hull, Newcastle upon Tyne and Nottingham, which were already counties, and Birmingham, Bradford, Leeds, Liverpool, Manchester, and Sheffield, which were not. The Local Government Act 1888 as eventually passed required a population of over 50,000 except in the case of existing counties corporate.[1] This resulted in 61 county boroughs in England and two in Wales. Several exceptions were allowed, mainly for historic towns: Bath, Dudley and Oxford were all under the 50,000 limit in the 1901 census. Some of the smaller counties corporate — Berwick upon Tweed, Lichfield, Lincoln, Poole, Carmarthen and Haverfordwest — did not become county boroughs, although Canterbury, with a population under 25,000, did.

The equivalent 1889 act for Scotland did not use the term, but gave a similar status to the cities of Aberdeen, Dundee, Edinburgh and Glasgow as "counties of cities". There was an additional category of "large burgh" in the Scottish system, which were responsible for all services apart from police, education and fire.

County boroughs were abolished by the Local Government Act 1972 in England and Wales, but continue in use for lieutenancy and shrievalty in local government districts in Wales.

Newport was originally in this list, but became a city in 2002.

For all practical purposes, county boroughs in Wales are exactly the same as the areas called "counties", as all these areas are run by unitary authorities (i.e.: have the functions of both boroughs and counties). Although unitary authorities are functionally equivalent to county boroughs, only in Wales is the title given official recognition by Act of Parliament.[3]

Galway became an additional county borough in 1986. Under the Local Government Act 2001 (which replaced most existing local government legislation in Ireland), the term "County Borough" was abolished and replaced with "City" (and hence, "Corporation" with "City Council"). However Kilkenny, while a city, is instead administered as a town (and part of the county council area) for local government purposes. It is allowed to use the title "Borough Council" instead of "Town Council".