From LGBT Archive
(Redirected from Croydon)
Jump to: navigation, search 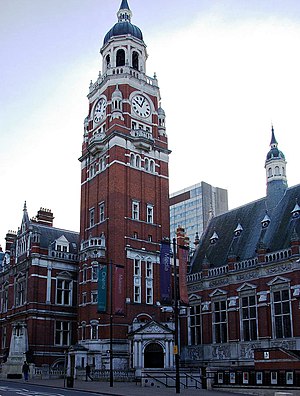 Croydon Town Hall and the Clocktower Arts Centre, scene of a number of events in LGBT History Month
Croydon is a town in South London, originally in Surrey. The London Borough of Croydon was formed in 1964 by uniting the County Borough of Croydon with the Coulsdon and Purley Urban District. It is the largest London Borough by population, with nearly a third of a million people. Croydon is the centre of the Tramlink network. Lunar House in Wellesley Road is the headquarters of the UK Borders Agency.

Archbishop John Whitgift's name is forever associated with Croydon. Havelock Ellis and Roberta Cowell were born in the town, and Georgina Somerset and Derren Brown were born in Purley. Jessie J and Sue Perkins went to school there, and D H Lawrence taught there. Hope Powell captained the Croydon team that won the FA women's cup in 1996.

There have been one or more gay or LGBT groups in the Borough since 1971. 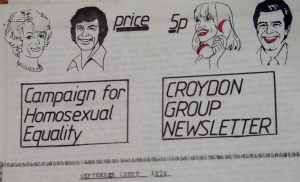 Steve Reed has been MP for Croydon North since 2012, and Mark Watson, founder of the UK Lesbian & Gay Immigration Group, is a local councillor.

In 2003 the Mayor of Croydon launched an anti-homophobia poster on the side of trams on two Tramlink routes.[1]

CAGS Logo
London Group Seven of the Campaign for Homosexual Equality was founded in 1971 but was soon renamed Croydon CHE Group. When the various CHE groups were split from the parent organisation it became Croydon Area Lesbian and Gay Society (CALGS) and subsequently Croydon Area Gay Society (CAGS).[3] It celebrated its 40th anniversary in 2011 with a party at a local gay venue, and a reminiscences session in a pub in central Croydon. CAGS has a variety of social events every month, an open meeting alternate months, and an active tennis group, playing every Sunday throughout the year.

Silver Rainbow, a service from CAGS in partnership with Age UK Croydon, offers a lunch club for older gay and lesbian people twice a month.[4]

CAGS sponsors the Rainbow Reading Group, together with Croydon Libraries.

Aurora, Croydon's LGBT Police Consultation Group, has been meeting on alternate months since 2003.

LGBT Croydon is a web portal sponsored by CAGS, providing information about all the local LGBT groups: http://www.lgbt-croydon.org.uk/

A previous web portal, set up by Croydon Health Promotion in 2002, was called Croydon Pride.

A group called "Insight" was set up around 2008 to provide support for LGBT victims of hate crime, but it is thought to no longer exist.

The ACE Centre (AIDS Care and Education) operated for several years in its own premises in Croydon and later Mitcham, providing support for people affected by HIV, with several members of the local gay community in leading roles.

The Gemini support group had its base in Croydon.

Croydon Trans Group was set up in 2000. In 2014 it changed its name to TransPALS (Trans People Across London South). It meets monthly in a venue in Croydon. 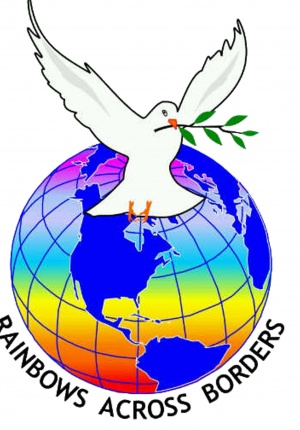 Croydon Friend was set up to provide a counselling and befriending service, with regular telephone help sessions and other activities. It lasted from 1973 to 2001, by which time the need for such a service had been much reduced.

Croydon Area Gay Youth (CAGY) flourished for a number of years, generally working in partnership with CAGS (the two groups shared a chairman for about a year). Croydon Gay 20s and 30s lasted for a short time, but never attracted many members, and Crocus had for a while an offshoot called Crocus 18-30.

In the early 21st century there was a group called "Cygnet", later renamed "OMO Youth" for the under-25s, organised by Croydon Council Youth Service. It has since been replaced by The Bridge, an LGBT youth club meeting weekly.

At one time there were a number of gay venues in Croydon, including The Croydon in St George's Walk (long boarded up, but now re-opened as "The Odd Shoe" and claiming to be gay-friendly), the Goose and Carrot (demolished), the Hollybush (Crystal Palace), PJs in Thornton Heath, the Duke of Clarence in South Norwood and The Wine Lines in Station Approach, Norwood Junction [6]. The Star in West Croydon, although not gay, was the location for a very successful series of discos which raised money for the Croydon CHE Group. It has since been renamed the Broad Green Tavern.

This left the Bird in Hand, Sydenham Road, as the only full-time gay pub in the town, and it is now better described (like many other formerly gay pubs) as "gay-friendly" rather than "gay".[7]