From LGBT Archive
(Redirected from Cleveland)
Jump to: navigation, search 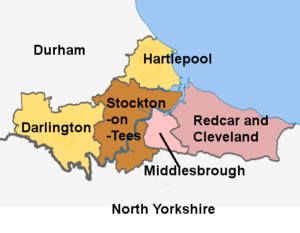 Map of the Tees Valley Region
Teesside is an area and former county borough around the River Tees in northern England, which became for a time the county of Cleveland.

The Stockton and Darlington Railway, opened in 1825, was the world's first passenger railway.

The County Borough of Teesside was formed in 1968 from Billingham and Stockton-on-Tees in County Durham, and Middlesbrough and other towns in the North Riding of Yorkshire.

In 1964 the county borough was divided between three new districts, Stockton-on-Tees, Middlesbrough and Langbaurgh (later renamed Langbaurgh-on-Tees). The three districts, together with Hartlepool, constituted the new county of Cleveland.

The county in turn was abolished in 1996 and divided along the line of the River Tees between two ceremonial counties, County Durham and North Yorkshire. For administrative purposes it was divided between four unitary authorities:

A Tees Valley Combined Authority, with an elected mayor, has brrn set up covering the area of the four councils together with Darlington, but the separate councils will continue to exist.

The Teesside CHE Group was founded in 1970.

Mesmac North East has an information page for Teesside[2]