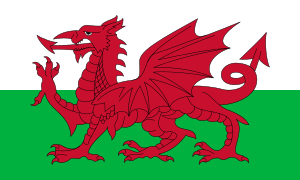 The flag of Wales
Wales (Welsh: Cymru) is one of the constituent countries of the United Kingdom, and often referred to as a Principality, although the Welsh Assembly Government say this is not correct.[1]

The Anglo-Saxon invasions that led the the emergence of England did not penetrate into Wales, which therefore remained independent, different parts being ruled by petty kings (including Maelgwn, King of Gwynedd) and princes.

King Edward I, having conquered Wales, is said to have offered the people of Wales a prince who spoke no English, and fulfilled this promise by presenting to them at Caernarfon his son, the future Edward II, who was still a baby. Since then the title "Prince of Wales" has been regularly granted to the eldest son of the monarch.

Henry VIII's Laws in Wales Acts 1535–1542 brought the legal and administrative system in Wales in line with that in England. Since then England and Wales have mostly been treated as a single unit in legislation.

Devolution for Wales was rejected in a referendum in 1979 but approved in a second referendum in 1997. This led to the Government of Wales Act 1998, steered through Parliament by Welsh Secretary Ron Davies. As a result of the Act, Wales now has its own Welsh Assembly, although its powers are less than those of the Scottish Parliament. 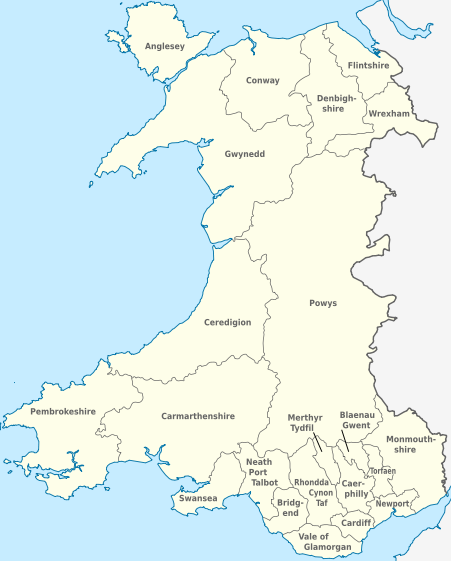 In 1996 the counties were abolished for administrative purposes, and the districts reorganised to form 22 areas, equivalent to English unitary authorities. However the eight counties were retained for ceremonial purposes, and are now referred to as "preserved counties".

The current local government areas, variously designated as counties, county boroughs, or cities, are as follows (grouped by preserved county):

There are four police forces in Wales, each of them covering one or more of the preserved counties.

See Police for a map of the police areas.

In 2006 the Government proposed to merge the four forces to create a single force for Wales (as has since been done for Scotland) but this proposal, together with similar proposals for the English regions, was unpopular and soon abandoned.