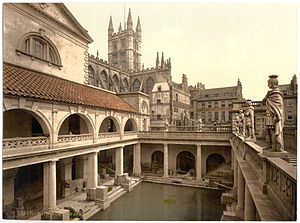 The Roman baths
Bath is a city in south-west England, within the historic county of Somerset. In 1974 it became part of the county of Avon. In 1996 Avon was abolished, and Bath, together with the Wansdyke district ,became a new unitary authority of Bath and North East Somerset.

Bath has been known since Roman times for its hot springs. The host baths and surrounding buildings have been designated a World Heritage Site.

Bath Gay Awareness was founded in 1971.

There is a Bath ("Living Springs") congregation of the Metropolitan Community Church.

Bath & North East Somerset Men's Sexual Health was set up by the NHS.[1]