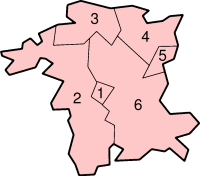 1 Worcester
2 Malvern Hills
3 Wyre Forest
4 Bromsgrove
5 Redditch
6 Wychavon
Worcestershire is a county in the West Midlands region. Its boundaries have changed considerably over time, largely because of the growth of the neighbouring West Midlands conurbation. At one time Worcestershire included a number of separated enclaves and exclaves, notably Dudley, which was part of Worcestershire although entirely surrounded by Staffordshire. In 1974 Worcestershire was united with Herefordshire to form the county of Hereford and Worcester, but this proved unpopular, and the two counties were separated again in 1998.

In June 2012 a series of Worcestershire Rainbow Picnics were organised by Rory Shannon in Bromsgrove, Redditch and Worcester, with the aim of bringing together LGBTQ people across the county.[3]

Worcestershire is part of the West Mercia Police area.