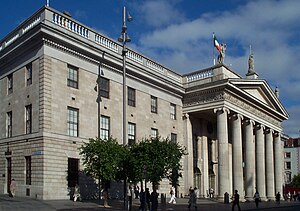 The GPO on O'Connell Street, site of the 1916 Easter Rising
Dublin (Irish: Baile Átha Cliath) is the capital of Ireland. As such it was part of the United Kingdom until 1922. For a time in the 18th century it was the second largest city in the British Empire.

In general this article will only deal with matters up to 1922.

In 1640 John Atherton was executed for sodomy in St Stephen's Green.

Oscar Wilde was born in 1854 at 21 Westland Row. The house is now part of the Oscar Wilde Centre, Trinity College, and is being restored and furnished in the 1850s style.[1]