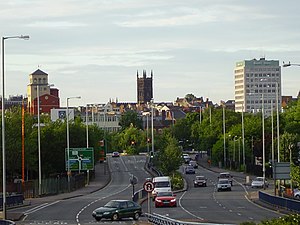 Wolverhampton
Wolverhampton is a city and metropolitan borough in the West Midlands (originally in Staffordshire). it is a major centre for the engineering industry.

In 1968, following police observations, George Smith was prosecuted for running a disorderly house in Wolverhampton known as the Flamingo Club. At Wolverhampton Quarter Sessions in July that year evidence was presented including that men were dancing together and behaving indecently. Smith was fined £500. [1]

MANDFHAB (Male and Female Homosexual Association of Britain) was a short-lived local gay organisation in 1968, a precursor to the West Midlands CHE Group, founded in 1970.[2]

The Silver Web was a popular gay club.

The Wolverhampton Harts football club was founded in 2010, and changed its name to Wolves Warriors AFC in 2013.

Wolverhampton and Black Country Pride was held in July 2012.[4]