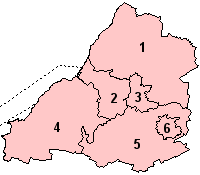 Avon was a county in south-west England from 1974 to 1996. It comprised parts of Gloucestershire and Somerset plus Bristol. On its abolition in 1996 it was replaced by four unitary authorities:

The name lives on in the local police force, the Avon and Somerset Constabulary, and in Avon Trans People (originally Avon Trans Women).

The West of England Combined Authority, set up in 2017, covers the former county council area with the exception of North Somerset.