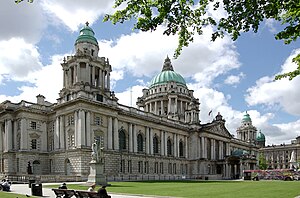 Belfast City Hall
The City of Belfast (Irish: Béal Feirste, meaning "mouth of the shoal") is the largest city of Northern Ireland and the the seat of its devolved government. It has a population of over 250,000 and the population of the greater Belfast Urban Area is more than double that. Belfast developed as a centre for the linen trade and ship building. It was severely affected by the Troubles, but its economy has prospered since the Good Friday Agreement in 1998.

Belfast is mainly located in the historic county of Antrim but straddles the border with County Down. 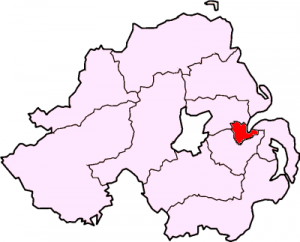 The Belfast CHE Group was founded in May 1971. In May 1973 it merged with the local GLF group to form Belfast Gay Liberation Society.

Belfast Pride has been held annually since 1990.

In May 1997 an off duty RUC police officer was in the gay Parliament Bar in Belfast when he was shot dead by an unidentified assassin from the Irish National Liberation Army. The dead officer, Darren Bradshaw (born 1973), was just coming to terms with his sexual orientation [1].

The Belfast LGBT Centre was opened in 2009.

The Belfast Butterfly Club is a support group for trans people and their families.

Belfast Front Runners has been a running and walking group for LGB&T people and their friends and supporters.[2]

The Outburst Queer Arts Festival is held annually in November.

There is a Belfast Lesbian Line.

There are a number of gay bars, many of them concentrated in the Cathedral Quarter.