In 1972 the southern part of the county was detached to form parts of Greater Manchester and Merseyside, and Furness in the northern part became part of Cumbria, but these areas are still included in the County Palatine of Lancaster. 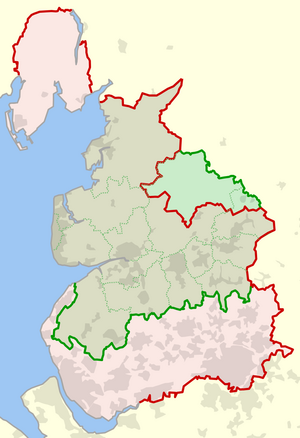 The historical boundary of Lancashire, in red, and the modern-day boundary of the ceremonial county, in green
The North East Lancs CHE Group was founded in 1970.

The Navajo project was started in 1999.

In August 2012 the Big Lottery Reaching Communities Fund awarded a grant of £450,000 for a Lancashire LGBT centre.[3]