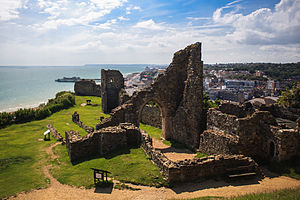 Remains of Hastings Castle, with the town and pier in the background
Hastings is a seaside town and local government district in East Sussex. At the Battle of Hastings, which took place about eight miles away in 1066, the forces of William Duke of Normandy (thereafter King William I) defeated the English forces, and King Harold II was killed.

Dr Sophia Jex-Blake was born in Hastings in 1840.

The 1066 Gay Community Organisation was founded in September 1982 and voted to dissolve itself in 1989.

In 2010 the University of Brighton secured funding for a study of the gay community in Hastings.[1][2]

The UK's first national lesbian and gay biker rally was held in Hastings in September 2011.[3][4]

The first Hastings Pride was planned for 2017.