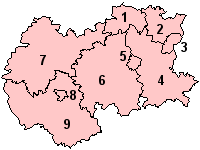 The county was divided into nine districts: