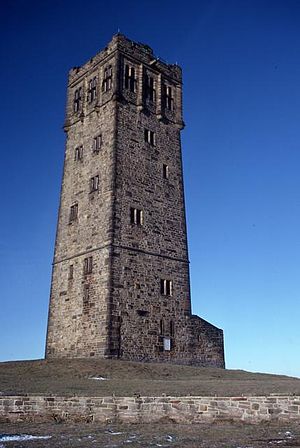 Victoria Tower, Castle Hill
Huddersfield is a town in West Yorkshire, formerly in the West Riding, now part of the metropolitan borough of Kirklees. It is known as the birthplace of Rugby Union. Local landmarks include the Grade 1 listed neoclassical style railway station.

Huddersfield CHE Group was formed in November 1971 as an offshoot of the Trans-Pennine Group.

In 1981 the gay Gemini Club in Huddersfield was being harassed by the local police, who opposed the renewal of its licence. As a protest, the London Pride March that year was moved to Huddersfield; as a result, many charges against gay people were dropped and the club kept its licence.[1]

Huddersfield Gay Group (HuGG) is a local group for gay and bisexual men.[2]