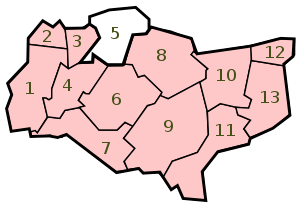 There is additionally a unitary authority, Medway.

In 2003, following the repeal of Section 28, The Conservative-run Kent County Council decided to create their own version of Section 28 to keep the effect of the now repealed law in their schools.[1] This was replaced on 16 December 2004 with provisions stating that heterosexual marriage and family relationships are the only firm foundations for society.