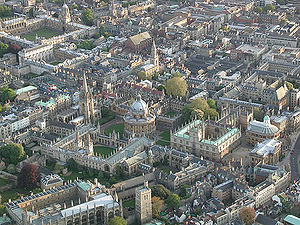 Aerial view of the centre of Oxford
Oxford is a city in south central England, located on the River Thames (locally known as the "Isis") near its confluence with the Cherwell. It is the county town of Oxfordshire and mainly noted for Oxford University, the oldest university in the United Kingdom (comprising a number of partly autonomous colleges), but during the 20th century it also became an important centre for car manufacturing.

In 1863 Charles John Vaughan was forced to refuse appointment as Bishop of Oxford.

Simon LeVay was born in Oxford.

Many notable LGBT people have studied at Oxford University.

Oxford Friend was founded in 1980 by a group of local volunteers who were part of the Oxford CHE Group.[1]

The Oxford Gay and Lesbian Community Centre (OLGCC) was opened in October 1991.

There is an Oxford Lesbian History Group[3]