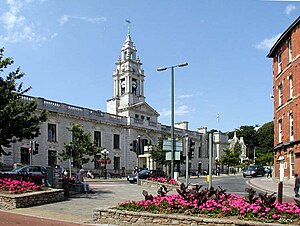 Torquay Town Hall
Torbay is a borough on the south coast of England, sometimes referred to as the "English Riviera". It is a unitary authority within the ceremonial county of Devon and contains the towns of Torquay, Paignton and Brixham. The main local industry is tourism, but fishing is also important at Brixham.

There was a Torbay CHE Group.

There is a Torbay and Plymouth congregation of the Metropolitan Community Church.[1]

In 1993, Nanda Saint Clair was excluded from a Torbay beauty contest when she was revealed to be transsexual.[2]

In 2010, Torbay was featured in an article in the Seattle Lesbian.[4]