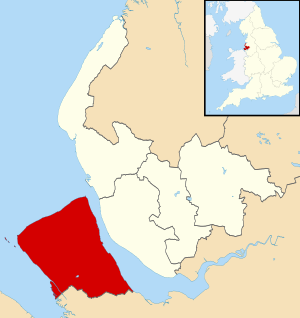 Metropolitan Borough of Wirral shown within Merseyside
The Wirral is a peninsula in north-west England between the Dee and Mersey estuaries.It was historically part of Cheshire but since 1972 the northern part, including Birkenhead and Wallasey, has formed the Metropolitan Borough of Wirral in Merseyside. The southern part is now included in the unitary authority of Cheshire West and Chester.

There were a Wirral CHE Group and a New Brighton CHE Group in the 1970s.

Kenneth Halliwell, partner and murderer of Joe Orton, was born in Bebington in 1926.

Pete Burns, singer-songwriter, was born in Port Sunlight in 1959.

Angela Eagle is MP for Wallasey.