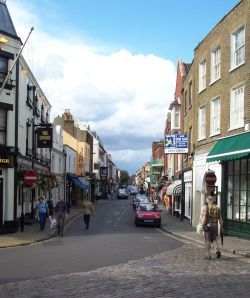 Eton High Street from Windsor Bridge
Eton is a town in the Windsor and Maidenhead district of Berkshire, immediately across the thames from Windsor. Until 1974 it was part of Buckinghamshire. By 1925 the village was described as more commercial than residential, with most of the buildings belonging to businesses serving students at the college.[1] Eton College Arms
Eton College is probably the most famous of English public schools. It was founded in 1440 by King Henry VI as "The King's College of Our Lady of Eton besides Wyndsor". It educates over 1,300 pupils, aged 13 to 18. Eton counts a large number of British prime Ministers (including David Cameron) amongst its former pupils.

The Eton Dragonflies is the official society for Gay Old Etonians.[2]

Notable headmasters include Nicholas Udall who was removed from his post in 1541 for offences under the recently enacted Buggery Act 1533, and Anthony Chevenix-Trench, noted for his enthusiasm for corporal punishment.

M R James was Provost of Eton (effectively chair of the governors).