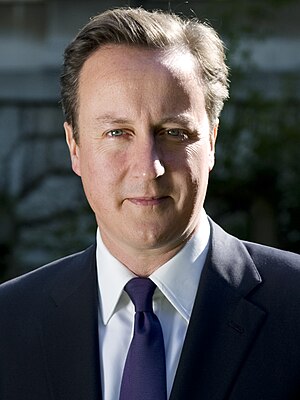 Cameron was born in London and brought up in Peasemore, Berkshire. He was educated at Eton College and Brasenose College, Oxford. In 2001 he was elected as MP for Witney. In 2005 he became leader of the Conservative Party, and in 2010 he became Prime Minister, leading a coalition with the Liberal Democrats. In 2015 following the general election his party was returned with an overall majority. In 2016, following the referendum which resulted in a decision that the United Kingdom should leave the European Union, he resigned as Prime Minister and leader of the Conservative Party, being succeeded by Theresa May. In September that year he resigned as a Member of Parliament.

In 2000, Cameron opposed the Labour Party's proposals to repeal Section 28, and as an MP he voted to retain certain aspects of it. However after being elected Conservative leader he apologised for the party's having introduced the clause.[1]

In 2010 he received a score of 36% in Stonewall's analysis of MPs' voting records on lesbian, gay and bisexual equality.[2]

In October 2011 he urged Conservative MPs to support gay marriage. In a keynote speech in Manchester he said that he backed gay marriage not in spite of his conservatism but because he is a conservative, and claimed it was about equality.[3]

In December 2012 he stated that he wanted to give religious groups the ability to host gay marriage ceremonies, and that he did not want to exclude gay people from a "great institution".[4] In November 2012, Cameron and Nick Clegg agreed to fast-track legislation for introducing same-sex marriage.[5] In 2013, the Bill was presented to the House of Commons and less than 50% of Conservative MPs backed his proposals for gay marriage.[6]

Cameron has spoken against extending civil partnerships to heterosexual couples.[7]

In August 2013, he rejected calls by Stephen Fry to strip Russia from hosting the 2014 Winter Olympics due to its anti-gay laws.[8] Cameron did not attend the games but denied it was a boycott in protest at Russia's laws, having previously raised the issue of gay rights in the country with Russian president Vladimir Putin.[9]

He was listed under "Friends to LGBT people" in the Independent on Sunday's Pink List 2013 and under "Straight Allies" in the World Pride Power List 2014. The Pink List 2013 citation said:

"Credited with pushing through The Marriage (Same Sex Couples) Bill despite a rebellion by 136 Tory MPs. The first ceremonies are expected next summer."[10]