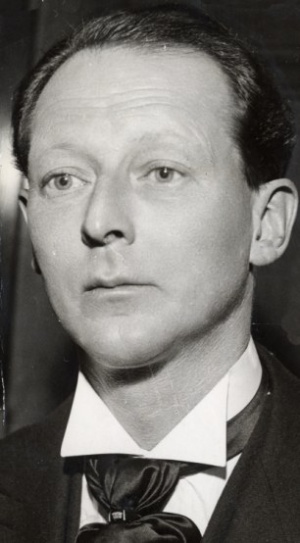 Evan Morgan
Evan Frederic Morgan, 2nd Viscount Tredegar (1893–1949) was a Welsh poet and author. Morgan succeeded as 2nd Viscount and 4th Baron Tredegar in May 1934. He was born at 33 Cadogan Terrace, Hackney[1] and educated at Eton College and Christ Church, Oxford.[2]

As an accomplished occultist, he was hailed by Aleister Crowley as "Adept of Adepts".[3]

Tredegar came from what the 13th Duke of Bedford described as "the oddest family I have ever met".[4] This observation could have stemmed from the rumour that his mother had built bird nests large enough to sit in, or that his father had owned one of the largest yachts in the world. In 1925, his sister Gwyneth Ericka Morgan was found dead at age 29 in the River Thames.

A noted eccentric, Tredegar kept at Tredegar House in Newport, Monmouthshire a menagerie of animals including a boxing kangaroo, honey bear, baboon and macaw. Morgan's weekend house parties attracted such figures as Aldous Huxley, H. G. Wells, Augustus John, and Aleister Crowley and gained local notoriety, as did the host's extravagant lifestyle. He later converted to Roman Catholicism and was became chamberlain to both Pope Benedict XV and Pope Pius XI.[3]

In 1929, he stood as the Conservative candidate for Limehouse. During World War II he was a high-ranking officer in MI8. Extraordinarily well-connected, his associations included Queen Mary, Brendan Bracken, and leading nazis.[3]

Despite his known homosexuality and reputation for dissipation, he married twice.[5] His first wife was Lois Ina Sturt (1900–1937), an actress and daughter of Napier Sturt, 2nd Baron Alington; they married in 1928. After her death, he married Princess Olga Sergievna Dolgorouky (1915–1998); they married in 1939 in Singapore, but the marriage was annulled in 1943. A more significant relationship was his affair with the novelist Ronald Firbank.

[Based on a Wikipedia article, but needs some improvement.]