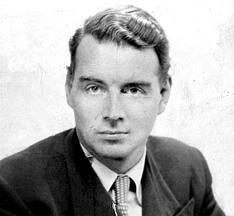 Guy Burgess
Guy Francis de Moncy Burgess (1911–1963) was a British radio producer, intelligence officer and Foreign Office official. He was one of the "Cambridge Five" who passed Western secrets to the Soviets before and during the Cold War.

Burgess was born in Devonport and educated at Eton College, the Royal Naval College, Dartmouth, and Trinity College, Cambridge. While at Cambridge he was a member of the Apostles, along with Anthony Blunt. While working at the Foreign Office and at the British embassy in Washington, he passed top secret documents to the Soviet Union. In 1951 his fellow spy Donald Maclean came under suspicion, and Burgess and Maclean famously fled together to Moscow.

Unlike Maclean, who became a respected Soviet citizen in exile and lived until 1983, Burgess did not take to life in the Soviet Union very well. His homosexuality may have been a problem, though he lived openly with a lover. Also, unlike Maclean, he never bothered to learn Russian, furnished his flat from London and continued to order his clothes from his Savile Row tailor. Becoming ever more dependent on alcohol, he died, aged 52.

Anthony Blunt, in his memoir released to the public on 22 July 2009, 26 years after Blunt's death in 1983 and 46 years after Burgess's death in 1963, described Burgess as "an extraordinarily persuasive person" who talked him (Blunt) into joining the spy ring.[1][2] Although they were both homosexual and even shared a house together, Blunt claims that there was "nothing sexual" in their relationship.[1][2]