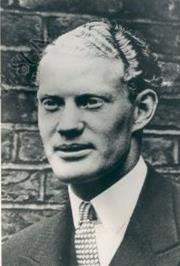 His grandfather had been British Ambassador to the United States, and his father had married a wealthy American heiress. Latham was educated at Eton College and Magdalen College, Oxford.[1] he served briefly on the London County Council (1928–34) as member for Lewisham East, representing the Conservative-backed Municipal Reform Party.

In 1931 he was elected MP for Scarborough and Whitby and also succeeded to the baronetcy on his father's death. In 1933 he purchased Herstmonceux Castle and continued the the process of restoring it from a "picturesque ruin".

An undistinguished backbencher, he was exempt from military service as an MP during the Second World War, but volunteered for the army and joined the 70th Searchlight Regiment in Sussex. In 1941, after some indiscreet letters were discovered, he was tried by court martial for ‘improper conduct’ with three gunners and a civilian. To this was added a charge of attempted suicide; when he heard that one of the gunners had written an accusing letter to his superiors, he tried to kill himself by throwing himself off his speeding motor bike.[2]

As a result of his trial he had to resign his seat in the Commons. As his defence counsel told the jury at his trial, "Whatever your decision is in this case, Sir Paul’s life is now pretty well damned." He was found guilty of ten our of thirteen charges, and sentenced to be cashiered.[3] He was also given two years’ imprisonment, and his wife divorced him while he was inside.

His friend James Lees-Milne saw him soon after he came out of prison:

"Paul says that no one has ever insulted him since he came out of prison, but I noticed that people in the Eastbourne hotel stared at him Just the same in appearance, like a bounding retriever puppy, he was giggly and rather endearing… Less sex mad."[4]

Left with no income and no inherited money from his wife, he was forced to sell Herstmonceux Castle. He died broke and broken, scarce fifty years old.