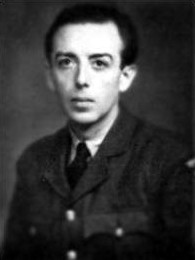 Brian Howard
Brian Howard (Brian Christian de Claiborne Howard, 1905–1958) was a poet and later a writer for the New Statesman.

Howard was born to American parents in Hascombe, Surrey, and brought up in London. He was educated at Eton College, where he was one of the Eton Arts Society group including Harold Acton and Oliver Messel. He entered Christ Church, Oxford in 1923, not without difficulty. He was prominent in the group later known as the Oxford Wits. He was one of the Hypocrites group that included Harold Acton, L P Hartley and Evelyn Waugh.

It has been suggested[1] that Howard was Waugh's model for Anthony Blanche in Brideshead Revisited. But Waugh wrote, to Lord Baldwin, "There is an aesthetic bugger who sometimes turns up in my novels under various names—that was 2/3 Brian [Howard] and 1/3 Harold Acton. People think it was all Harold, who is a much sweeter and saner man [than Howard]."[2]

Howard spent the 1930s drifting around Europe, where he had affairs with various young men before settling on Toni, a young blond German bisexual who he had met in Munich. In September 1935 he and Toni were staying at the same pension as Christopher Isherwood and Klaus Mann in Amsterdam. Returning to Britain at the outbreak of WWII, he held position in the M15 and in the Royal Air Force during the war.[3]

He suffered from bad health in the 1950s, and committed suicide by taking an overdose of sedatives after the accidental death of his lover, Sam Langford, an American man, who died suddenly but naturally in Howard's bath.[4][5] They were buried alongside each other at the Russian Orthodox Cemetery, Nice.

(Partly based on a Wikipedia article)