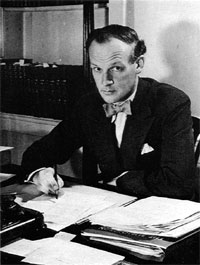 Lees-Milne was born into a prosperous manufacturing family on 6 August 1908 in Wickhamford, Worcestershire.[1] He went to Lockers Park School, Hertfordshire, and Eton College. Though shy and withdrawn, he formed passionate friendships - notably with Tom Mitford and Desmond Parsons, both of whom would die young. He also conceived a passion for Tom's sister Diana (who would later marry JLM's relative, the fascist leader Sir Oswald Mosley). After Eton, his father made him take a secretarial course in London, as hilariously described in his autobiographical novel Another Self. But thanks to his mother's support he entered Magdalen College, Oxford at the age of twenty, reading history.[2]

After Oxford he became private secretary to Lord Lloyd. He lived for a time in the London flat of Harold Nicolson.[2]

In 1936 he was appointed secretary of the Country Houses Committee of the National Trust.[1] He held that position until 1950, apart from a period of military service from 1939 to 1941. After resigning his full-time position in 1950, he continued his connection with the National Trust as a part-time architectural consultant and member of committees.

In 1951 he married Alvilde, Viscountess Chaplin, née Bridges, a prominent gardening and landscape expert.[1] She died in 1994. Both Lees-Milne and Alvilde were bisexual, and Alvilde is reputed to have had lesbian affairs with Vita Sackville-West and Winnaretta Singer, among others.[3]