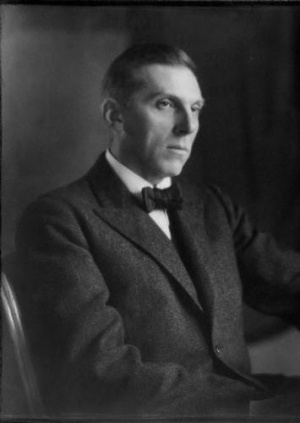 Born in Hove, Sussex[1] (a commemorative blue plaque is on the house at 4 Brunswick Square),[2] Quilter was a younger son of Sir William Quilter, a wealthy noted landowner, politician and art collector. Quilter was educated at Eton College and later became a fellow-student of Percy Grainger in Frankfurt, where he studied for almost five years. His reputation in England rests largely on his songs and on his light music for orchestra, such as his Children's Overture, with its interwoven nursery rhyme tunes, and a suite of music for the play Where the Rainbow Ends. He is noted as an influence on several English composers, including Peter Warlock.[3]

In November 1936, Quilter's opera Julia was presented at Covent Garden by the British Music Drama Opera Company under the direction of Vladimir Rosing.

Quilter enjoyed a fruitful collaboration with the tenor Gervase Elwes until Elwes' death in 1921. As a homosexual, he found it difficult to cope with some of the pressures which he felt were imposed upon him, and eventually deteriorated into mental illness after the loss of his nephew Arnold Guy Vivian during the Second World War.[4]

He died at his home in St John's Wood, London, a few months after celebrations to mark his 75th birthday, and was buried in the family vault at St Mary's Church, Bawdsey, Suffolk.