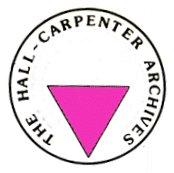 HCA logo
The Hall-Carpenter Archives (HCA, founded 1980) are Britain's major resource for the study of lesbian and gay activism in the UK since the publication of the Wolfenden Report in 1957. Their name commemorates the gay writer Edward Carpenter and the lesbian novelist Radclyffe Hall. in the mid 1980s the collection was held at the London Lesbian and Gay Centre (LLGC), 69 Cowcross Street, London EC1.