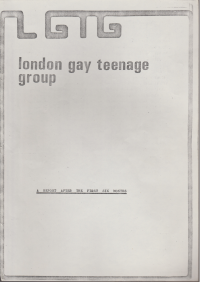 The first 6 monthly report on LGTG produced in July 1977
The idea of a London Gay Teenage Group was developed in 1975 by CHE Teenage Movement which was designed to cater for gay youths under 21. Phillip Cox and Paul Welch were involved in this. Their frustration with lack of progress through CHE appears to have led them to break away and establish LGTG as independent from CHE in autumn 1976. This small group first met in a basement at the Oval House Theatre, Kennington, London and at London Friend. By the end of 1976 the group were meeting upstairs at Grapevine premises, 296 Holloway Road, London N7 (in the London Borough of Islington) [1]. A small collective committee was formed including Robert Halls, Secretary, Steven Power Chairperson, and Andy Martin, Publicity. The group was run by and for gay and lesbian young people under-21 (who would all at that time have been under the age of consent)[2]. It initially met on Sunday afternoons weekly, and after a while,also on Wednesday evenings, in Kentish Town [3]. A local youth worker Chris Heaume offered support to the group assisting young people to continue controlling their own group. 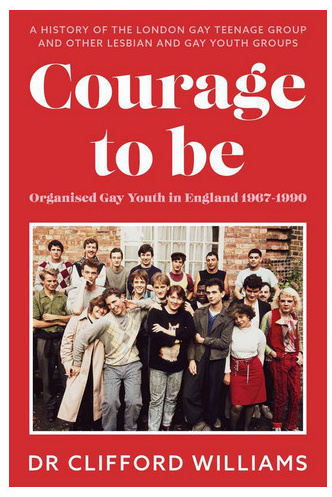 In 1979 the group moved to larger premises in Manor Gardens, Islington, London N7. In 1979 a young Lesbian Group was set up and this met on Monday nights. This ran until January 1982 when it broke away to come under the umbrella and funding of the both the Camden Girl's Project and the Islington Girl's Project [4].

Among the well known figures who attended the group before they found fame were Jimmy Somerville and Matthew Bourne.[5]

The Group fought for and won recognition from the National Association of Youth Clubs, and then ILEA (Inner London Education Authority), resulting in financial support and enabling the employment of a supporting youth worker. The first paid part time youth worker was Gregg Blachford, a lecturer at Paddington College.

In 1984 the group published Something to tell you, a research report summarising the findings of a survey of young LGB people,with a series of subsequent smaller publications on specific issues.[6] The group at that time was receiving some funding from the Greater London Council (GLC). The government's plan to abolish the GLC and how this would threaten the sort of research the LGTG had carried out was highlighted in a press release of July 31 1984 [7].

In 1987 provision for gay young people in the London Boroughs of Islington and Camden was made with the setting up of North London Line. This operated a number of projects for young lesbian and gay people aged under 25. Some young people who attended the LGTG also attended NLL projects.

By 1998 the group was renamed the London Lesbian, Gay and Bisexual Teenage Group. In that year Richard Collumbell was chairperson [8]. During LGBT History Month in 2019, Dr Clifford Williams, gave talks on the origins of the group at the London School of Economics and the National Maritime Museum [9]. 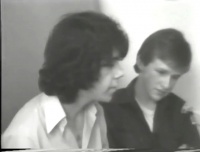 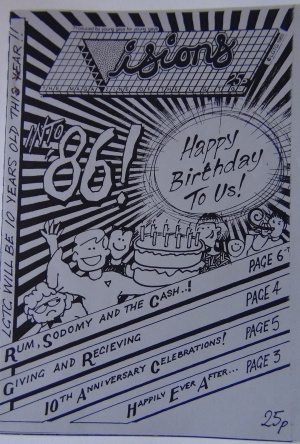 Visions magazine produced by the group in the mid 1980s 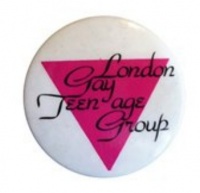 One of the first gay groups for young people (under 21) in the world, it represented a significant turning point in lesbian and gay history and was run by and for under-21s, initially having been ignored by the authorities. In the 1970s, it was unusual for young people to 'come out'[10]. 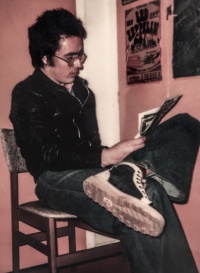 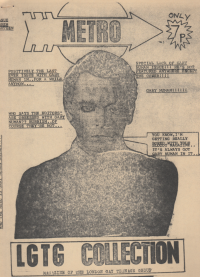 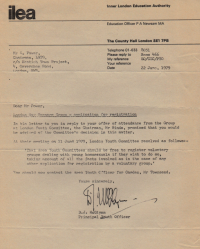 We didn’t stop there. I went to the Houses of Parliament with Rose Robertson of Parents Enquiry to hold the first meeting with leading politicians, including Edward Heath, on the age of consent. It was a productive meeting and paved the way for the eventual equalisation of the age of consent. As LGTG expanded, we moved to Manor Gardens near Archway and developed a whole host of new initiatives, including widening our support to young women. I later did an interview about my life with Professor Jeffrey Weeks OBE for BBC’s Open University.[12] 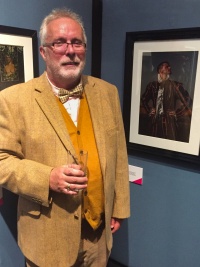 I am hoping that the archives will be made available through the National Archive collection in the future.[13]