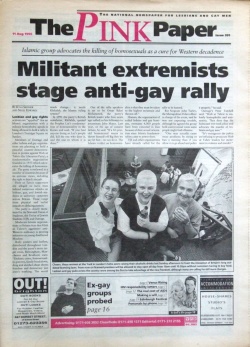 It was founded as a free tabloid-sized newspaper in 1987 by Stephen Burton and Stephen Burn. It was distributed fortnightly for free in gay bars and clubs as well as libraries and other venues. It was later acquired by Kelvin Sollis, who, with his partner David Bridle quickly made it into a success, printing it weekly. It was the first gay publication which held mainstream advertising and job adverts from local councils and the police. Whilst the Pink Paper was seen as a serious lesbian and gay campaigning newspaper, often with a lesbian bias, Kelvin and David set up the frothier male youth magazine, Boyz, off the back of it.[1]

When the first UK publication for people with HIV and AIDS was published in 1995, Positive Times, it was included inside the Pink Paper for reasons of discretion.[2]

Alistair Pegg was promoted to editor in 1999; David Bridle (Executive Editor) had been acting editor since the departure of Andrew Balkin.[3] In 2001 Tris Reid-Smith took over as editor.

In 2005 the Pink Paper was bought by MPG (Millivres Prowler Group, who also published AXM, DIVA, GT (formerly Gay Times) and Puffta and ran the Prowler and Expectations stores and brands). MPG re-launched it as a fortnightly paper but had to stop printing it at the end of June 2009 as it was not financially viable. While Pink Paper was the best-read gay title in the country, it lacked the advertising to keep it float during these tough economic times.

Like the print product, the the website featured all the arts, culture and travel coverage that readers had come to expect from Pink Paper, including big name celebrity interviews. Reflecting its role as a community brand, it didn’t carry gratuitous sexual imagery. This policy, together with the wide national reach and strong mixed male and female readership (another unique Pink Paper feature) made the title the natural home for recruitment advertising. Vacancies advertised online at Jobs.Pink Paper.com are backed up with jobs news articles, profiles of companies and advice and guidance for students and professionals who want to further their careers.

Pink Paper was unusual in the gay media in having regional correspondents across England, Scotland and Wales enabling it to cover stories which directly impact readers across the country. The news section at News.PinkPaper.com had a reputation for breaking stories and covered everything from crime to TV and from politics to the latest celebrity gossip.

The Pink Paper had a dedicated sports section and encouraged contributions from gay, lesbian and bisexual teams and sportsmen and women across the country. Pink Sport was available digitally through the News.PinkPaper.com part of the site.

In January 2012 PinkPaper.com, along with sister site divamag.co.uk, was awarded the Net Observer Excellence award for visitor satisfaction.

"With a hardening economy, diminished job advertising and increasing global online news services covering similar stories, it has become harder to justify continuance of this award-winning website as part of our publishing portfolio. We have chosen instead to focus our energies on our main print and digital brands GT (Gay Times) and DIVA. We thank the community, staff, advertisers and especially our readers for their support over the years and hope they will find the same valuable support and information from GT and DIVA in future."[4]

The website www.pinkpaper.com no longer exists. From October 2012 onwards it contained the message:

"Millivres Prowler Ltd are sorry to inform you that it is no longer practical for us to continue to update Pink Paper's daily website.
You can still get advice and news about all things gay and lesbian from our magazines and websites www.gaytimes.co.uk and www.divamag.co.uk respectively and our Pink Paper Dating site is still active at dating.pinkpaper.com"[5]

The Pink Paper Readers' Awards, held annually, allowed readers of the paper to nominate and vote for their favourites in various categories.