The original editorial collective included Denis Lemon (editor), Martin Corbett - who later was an active member of ACT UP, David Seligman, a founder member of the London Gay Switchboard collective, Ian Dunn of the Scottish Minorities Group, Glenys Parry (national chair of CHE), Suki J Pitcher, and Doug Pollard, who later went on to launch the weekly gay newspaper, Gay Week (he is now a presenter on Joy Melbourne 94.9FM, Australia's first full-time GLBTI radio station, and was for a time editor of Melbourne Star, the city's fortnightly gay newspaper). Harry Coen was News Editor for a time. 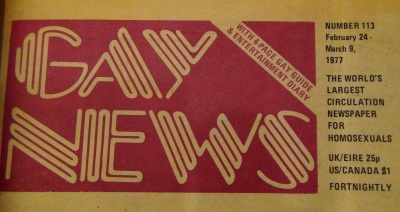 The paper played a pivotal role in the struggle for gay rights in the 1970s in the UK. It was described by Alison Hennegan (who joined the newspaper as Assistant Features Editor and Literary Editor in June 1977) as the movement's "debating chamber". Although essentially a newspaper, reporting alike on discrimination and political and social advances, it also campaigned for further law reform, including parity with the heterosexual age of consent of sixteen, against the hostility of the church which treated homosexuality as a sin, and the medical profession which treated homosexuality as a pathology. It campaigned for equal rights in employment (notably in the controversial area of the teaching profession) and the trades union movement at a time when left politics in the United Kingdom was still historically influenced by its Nonconformist roots in its hostility to homosexuality. But under the influence of its features editors, Howes and Hennegan, it also excavated the lesbian and cultural history of past decades as well as presenting new developments in the arts. Keith Howes later published the encyclopaedic reference, Broadcasting It, ostensibly dealing with homosexuality in film, radio and TV from 1923 to 1993 but amounting to a cultural review of British homosexuality in the twentieth century.[2]

Gay News challenged the authorities from the outset by publishing personal contact ads, in defiance of the law — in early editions this section was always headlined "Love knoweth no laws."

In the first year of publication, editor Denis Lemon was charged and fined for obstruction, for taking photographs of police behaviour outside the popular leather bar in Earls Court, the Coleherne.

In 1974, Gay News was charged with obscenity, having published an issue with a cover photograph of two men kissing. It won the court case.

The newspaper was featured in the 1975 movie Tommy.

In 1976 Mary Whitehouse brought a private prosecution of blasphemy (Whitehouse v Lemon) against both the newspaper and its editor, Denis Lemon, over the publication of James Kirkup's poem The Love that Dares to Speak its Name in the issue dated 3 June 1976. Denis Lemon was found guilty when the case came to court in July 1977 and sentenced to a suspended nine-month prison sentence and personally fined ₤1,000. When all totalled up, fines and court costs awarded against Lemon and Gay News amounted to nearly ₤10,000.[3]. After a campaign and several appeals the suspended prison sentence was dropped, but the conviction remained in force. The case drew enormous media coverage at the time. In 2002 BBC Radio 4 broadcast a play about the trial.