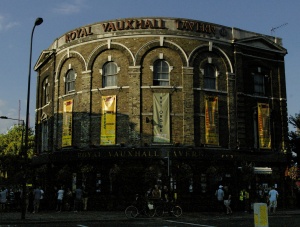 The RVT was built in 1863 at Spring Gardens, Kennington Lane, on land which was originally part of the Vauxhall Pleasure Gardens. It is thought to have started life as a Victorian music hall. After World War II, returning servicemen and local gay men were attracted to the venue, which held shows of female impersonators, the forerunner of drag shows.[1].

By 1975, the Royal Vauxhall Tavern had a kidney shaped bar which doubled as a stage for the drag artists to dance along in their stilettos from the tiny apron stage at one end. Prior to the cabaret starting the bar would be cleared of glasses and drinks and the staff would clean the bar ready for the drag to dance along it in their heels. The public bar attracted local workers and had a dart board whilst the lounge attracted the local gay community. Notable acts from this era include "Carla", famous for her Barbra Streisand impersonation and "The Great Lee Paris" on a Saturday night with Land of Hope and Glory , and There'll always be an England.[2] Freddie Mercury was a frequent visitor during the seventies.[3] At this time the words "The Palladium of Drag" adorned the exterior of the building .

During 1976 Roy Alvis staged an all male revue at both at the Royal Vauxhall Tavern and the Union Tavern, Camberwell New Road. The revue spawned a four-piece all male cabaret group called "The Boys Plus", which was later appeared at other London drag venues such as the Black Cap and The Cock (Lewisham). The group only lasted a couple of years but set the trend for shows in the 21st century such as Funny Girls in Blackpool.

The RVT survived local redevelopment throughout the 1970s and 1980s and has managed to maintain its independence as a gay venue. Many of London's top drag artists have appeared at the Royal Vauxhall Tavern, including Hinge and Bracket, and Diana Dors[4]. A resident for eight years and probably most famous entertainer, with shows four times a week, was Paul O'Grady as Lily Savage.[5]

The venue was under attack from the developers in the 1990s, when Lambeth Council entered into a three-year agreement with a developer and announced plans to build a shopping centre on the site[6]. Protesters marched to Lambeth Council and the development was subsequently dropped.

In 2005, the Royal Vauxhall Tavern was taken over by gay businessmen Paul Oxley and James Lindsay. With a new lighting and sound system the venue is now open seven nights a week and appears to be as popular now as it was when Lily Savage left in 1994.[7].

The interior of the venue has been totally remodelled. The horseshoe bar has gone, there is now a single public area facing a stage, with a bar down one side.

For over ten years, the South London Action Girls Society (S.L.A.G.S.)/Chill-Out has been hosted on Sunday afternoon by Jonathan Hellyer's Dame Edna Experience. It attracts a large number of devotees from all over London and further afield. In addition to the Dame Edna Experience the event is supported by resident DJs Simon Le Vans, Andy Almighty and Sean Sirrs who play a mixture of dance anthems and commercial house from 2pm until midnight.

Wotever World's "Bar Wotever" happens at the RVT on Tuesdays. 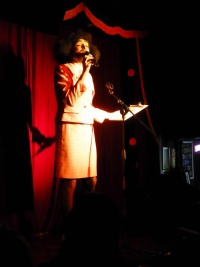 Timberlina at the 'Being Human' Festival event Nov 2019

In November 2020 The Vauxhall Tavern, who are highly critical of the LGB Alliance, stated that they would refuse to stock Boyz magazine as that magazine had merely advertised a gay men's debate organised by the LGB Alliance [10].

In July 2014, the RVT was granted listed building status. Grade II, based on a combination of the architectural interest of its exterior, and its historic interest as "one of the best known and longstanding LGB&T venues in the capital".[12] 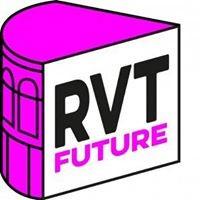 RVT Future logo
RVT Future is a campaign, made up of Tavern performers, promoters and regulars, fighting to secure the future of the Royal Vauxhall Tavern as an LGBTQ pub and queer performance space.[13]