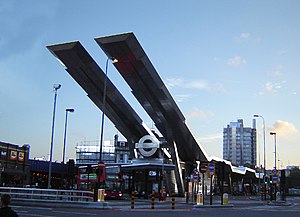 Vauxhall Cross transport interchange
Vauxhall is an area of London, part of the London Borough of Lambeth. It was noted in the 18th and early 19th centuries for the Vauxhall Pleasure Gardens, and is the origin of the Russian word вокзал (vokzal) meaning originally an amusement park and subsequently a central railway station. Today it is mainly known for the distinctive MI6 building at Vauxhall Cross (near the traffic roundabout leading to Vauxhall Bridge).

The Royal Vauxhall Tavern is one of London's oldest gay pubs. Vauxhall is now also the home to a number of gay venues, mainy of them housed in the railway arches, including Area, Barcode, Chariots Vauxhall, Crash, Eagle London, Factory, Fire, The Hoist, and the Union, as well as other venues often holding special events for gay clubbers, such as Club Colosseum, Hidden and Renaissance Rooms.

Nudity operates twice a month at the Union.

Partly based on a Wikipedia article.
Retrieved from ‘https://lgbthistoryuk.org/w/index.php?title=Vauxhall&oldid=40332’
Categories: