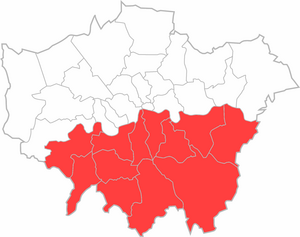 South London boroughs
South London is the southern part of London, which is normally considered to include everything south of the Thames.

Note that Richmond upon Thames is partly north of the river.

South London Gays (SLG) is currently based in Clapham.

Out in South London has been described as "London's premier LGBT radio show".