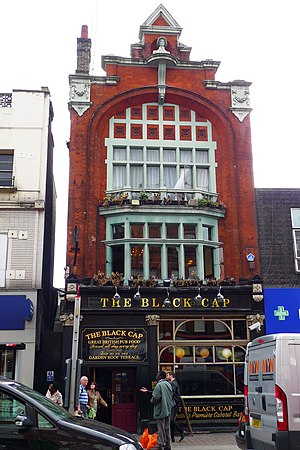 The entrance to The Black Cap

The Black Cap is a gay pub in Camden Town, London known for its drag cabaret.[1]

The pub was initially called the Mother Black Cap after a local legend concerning a witch,[2] and had that name, according to licensing records, as early as 1751.[3]

In the late 20th century it became known for its drag queen cabaret,[4] and promoted itself as the "Palladium of drag".[5][6] Drag acts such as Danny La Rue and Hinge and Bracket started their careers at the pub.[7]

A notable regular performer at The Black Cap, was Rex Jameson's drag persona Mrs Shufflewick. A performance was recorded there in 1972.[8] Rex Jameson was a variety artist who hit the big time in the fifties and sixties and went on to attract cult audiences in the seventies. The character Mrs Shufflewick was celebrated by artists such as Danny La Rue, Roy Hud, Bob Monkhouse, Barry Cryer and Barry Humphries. Mrs Shufflewick appeared weekly for Sunday Lunch The Black Cap during the seventies. A Hammond organ and drum kit took pride of place on a tiny stage upon which Mrs Shufflewick appeared for two shows. Sunday crowds were huge and several professional artists used to come to watch the shows including Charles Hawtrey, Barry Humphries and Barry Cryer.[9]

Rex died in 1983 and in memorial to Rex Jameson, the Black Cap now has an upstairs bar, called the Shufflewick Bar.

During the eighties, artists such as Reg Bundy performed his alter ego Regina Fong on Tuesday nights, attracting a cult following of "Fongettes".[10] Top drag acts such as Adrela and Lilly Savage also appeared at the The Cap during the eighties.

The London pub in the 1986 film Withnail & I is named The "Mother Black Cap", combining the name of the Black Cap with another Camden pub, The Mother Red Cap.[11]

In April 2015 it was reported that the Black Cap had closed down, despite being recognised as an Asset of Community Value (ACV).[12] 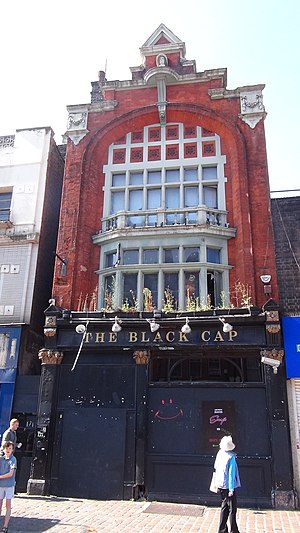