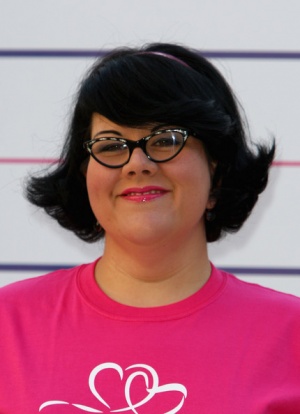 Amy Lamé was born and raised in New Jersey, USA, and moved to London in 1992. In 1994 she made her stage debut in her first one-woman show Gay Man Trapped in a Lesbian's Body as part of ICA London's Spring Exhibitions programme.

In 1995 Lamé co-founded the Olivier-award-winning performance-club-night and collective, Duckie, with Simon Strange, which she hosts every Saturday night at The Royal Vauxhall Tavern. In 1996 she curated, produced and hosted Keep The Faith at Tate Britain which explored the links between the gallery's permanent collection and faith. She commissioned new work to be shown in the gallery for one night only including an interactive performance installation tea party with 30 Anglican priests.

Lamé has contributed short stories to the anthology Typical Girls.[2] She also writes regular features on culture, travel and food for The Times.

From May 2010 to May 2011, she was Mayoress of Camden alongside Mayor Jonathan Simpson.[3]