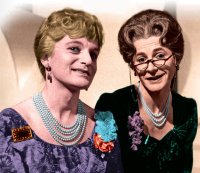 Hinge and Bracket
Dr Evadne Hinge and Dame Hilda Bracket were the stage personae of the musical performance and female impersonation artists George Logan (born Rutherglen, 1944[1]) and Patrick Fyffe (1942–2002; born in Stafford). Active in theatre, radio and television between 1972 and 2001, this comedy partnership entertained the public in the guise of two elderly eccentric spinsters, living genteel lives in the village of Stackton Tressel and celebrating their former careers on the provincial operatic stage.

Early appearances show Dr Evadne and Dame Hilda ostensibly emerging from retirement to perform in concert "by popular request". "The ladies" greet their public as old friends and give recitals in which they sing, play and reminisce about their past lives on tour in opera and musical theatre in the more elegant age of the years following the Second World War.

Talented musicians and vocal performers, Logan and Fyffe played exclusively in drag and in falsetto, serving up the musical numbers in a rich sauce of spinsterish bickering which formed the dynamic of the act. Logan acted as accompanist, arranger and foil for Fyffe's vocal performances. Details of the ladies' genteel lifestyle and theatrical history were shared with the audience for comic effect. In the spirit of authenticity, Logan and Fyffe enjoyed developing a detailed backdrop and life history for their stage personae.

Having breathed life into two such authentic figures, George Logan and Patrick Fyffe declined, for the duration of their stage partnership, to be interviewed out of character. In this way, they were consciously preserving the illusion of "the ladies" for their affectionate following, many of whom preferred, at some level at least, to believe in these endearing characters as real people.

Their stage partnership spanned theatre, stage shows, radio and television, and continued for 30 years until the death of Patrick Fyffe in 2002. George Logan retired from the stage in 2004.

As gay performers with a mixed fan-base, Fyffe and Logan were apt to lace their shows with gay-themed reference and innuendo which was usually fairly mild. Their live stage shows were, however, typically less restrained than the television and radio recordings made for broadcast.[2]

In conversation in the televised shows, there would be various old fashioned slang references to "Dorothy", and a few racier remarks. The stage shows were the main medium for delivering gay-themed innuendo. But in musical performance, Hinge and Bracket were inveterate teasers of their audience. In the course of their shows, they performed what amounted to the entire repertoire of light opera songs containing the word "gay", additionally mining G&S classics as a rich source of double-entendre from 'The Gondoliers' "Then One Of Us Will Be A Queen", via Patience "blithe and gay" through to the story of Iolanthe, which famously had one dainty foot in fairyland. Thus would the trail of gems be laid, innocently, straight-faced and of course in impeccable context. The audience could stoop to gather these, if so they wished, but "the ladies" were always looking firmly the other way.