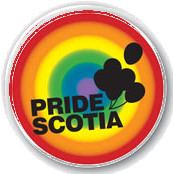 Pride Scotia logo
Pride Scotia is Scotland's national LGBT pride festival. Since 1995, volunteers have organised a Pride March and a community-based festival in June, alternating between the cities of Edinburgh and Glasgow.

Between 1995 and 2002, the pride marches were organised by Pride Scotland, until it went bankrupt in December 2002 with debts of around £60,000. A new organisation, Pride Scotia, was founded in 2003 to continue the tradition of the annual march and festival. This organisation changed its name to Pride Scotia (Edinburgh) in 2004 and a separate organisation Pride Scotia (Glasgow) was created with the two organisations organising Pride Scotia in their respective cities in alternate years thereafter. Pride Scotia Edinburgh is a company limited by guarantee whilst Pride Glasgow is now a Scottish Charitable Incorporated Organisation. In 2008, the Glasgow arm of the organisation announced it was splitting completely, and has since used the name Pride Glasgow.

In 1994, Laura Norris and Doogie Hothersall, both members of the University of Edinburgh LGBT society "BLOGS", decided to organise a Pride Parade to take place in the city of Edinburgh.

The first Pride march in Scotland gathered on Barony Street in Edinburgh on the 17th of June. Police estimated that around 3000 people attended. The route followed was Broughton Street, Leith Street, Princes Street, the Mound, George IV Bridge, and down Middle Meadow Walk into the Meadows. The first Pride Festival on the Meadows began as the procession arrived, and had a stage and surrounding stalls. It continued regardless of the rain, finishing as scheduled at 9pm. The cleanup took almost the entire Sunday and around 20 volunteers.

The second Pride march in Scotland was held in Glasgow on the 22nd of June, finishing with a festival on Glasgow Green. Guests included Quentin Crisp.

The third Pride march in Scotland was held in Edinburgh, with the festival again on the Meadows on the 21st of June. This year was the first year to include a minute's silence, followed by a minute's noise, to mark the effects of AIDS and HIV on the LGBT communities in Scotland. The tradition has been repeated year by year since, led by the Sisters of Perpetual Indulgence.

On the 13th of June, the fourth march began in Blythswood Square and ended at Glasgow Green, where the festival took place. The Glasgow women's drumming group, SheBoom, led the march. The Pride Scotland banner for 1998 was carried by George Galloway MP, Tommy Sheridan, and Louise Fyfe.

Keeping with tradition, this year's Pride was held in Edinburgh, on the 19th of June. Assembly in East London Street. In keeping with the two previous Edinburgh prides, the route followed was Broughton Street, Leith Street, Princes Street, the Mound, George IV Bridge, and down Middle Meadow Walk into the Meadows. The route passed the then-current home of the Scottish Parliament, and the headquarters of the Bank of Scotland, which had earlier that year been the scene of protests against the Pat Robertson deal. The lesbian drummer band Commotion, near the head of the procession, ceased playing in silent protest as the march passed the bank, and many marchers followed an informal call to "boo the bank".

The festival was held in the Meadows: the theme for this year's festival was "Celebrate Diversity" and included the introduction of the Diversity Area.

Pride was held in Glasgow much later than usual this year, on 2 September.

Pride held in Edinburgh on June the 23rd.

Pride held in Glasgow on June 22. The march began in Blythswood Square and ended in Glasgow Green, where rain helped to shrink numbers below financial viability for what was the first (and only) festival to have an admission charge.

This year, the march took place in Edinburgh on the 19th of July. Following the bankruptcy of Pride Scotland, this was the first year that Pride was organised by Pride Scotia. The festival was held in various locations along Leith Walk, including a sports day in Gayfield Square and a Health and Community Fair in Club eGo on Picardy Place.

This year, the march took place in Glasgow on July the 1st. The festival was held in Glasgow Green.

On the 25th of June, the march took place in Edinburgh, from East Market Street to Broughton Street. A Health and Community Fair was held in Club eGo on Picardy Place. Other associated events included an exhibition of AIDS/HIV commemoration quilts and a programme of LGBT films in the Filmhouse.

On the 24th June, thousands took part in a march through Glasgow city centre ending in the festival at eorge Square.[1] There was a small controversy with ten firemen refusing to hand out leaflets.[2]

On the 23rd June, the march and festival took place in Edinburgh. Due to bad weather the march was rerouted at the last minute to bypass The Mound. The march ran from East Market Street, via Princes Street, St Andrew Square, and Broughton Street and concluded in Pilrig Park where a Tented Village included marquees for Community, Youth, Performance, Men, etc.

This year, when Pride was to be held in Glasgow, the organisers announced they would be splitting from Pride Scotia, forming their own organisation, which they called Pride Glasgow. Pride Scotia will still continue to run in Edinburgh every 2 years as it has done previously. The re-launched festival was held on the August 30th 2008 and was attended by approx 5000 people, and involved a march from Blythswood Square to George Square with a rally and speeches from Nicola Sturgeon deputy first minister, Irfan Rabbani Glasgow City Council Equalities spokesperson Bruce Fraser Chief Executive of Gay Men's Health and Patrick Harvie MSP and leader of the Scottish Green Party.

This was the first year Pride was held in both Glasgow and Edinburgh. The Edinburgh arm was held on the 26th of June, and the Glasgow arm on the 17th of July.[3]

The Pride Awards have been presented at the annual Pride festival each year since 1998.

The Pride Awards acknowledge the people and the work accomplished in Scotland over the past twelve months, in the name of promoting equality, tolerance and respect.

The winner of this award is nominated by Glasgow Women's Library. The award is a memorial to Jackie Forster.

The winner of this award is nominated by PHACE Scotland.

Award for Art and Entertainment

The winner of this award is nominated by The List.

The winner of this award is nominated by the festival organisers.

The “Friend for Life” Award

The winner of this award is nominated by the Equality Network, to someone outside the LGBT community who has worked for LGBT rights in Scotland.