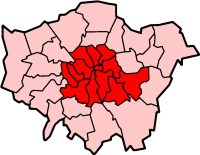 The ILEA area within Greater London
The Inner London Education Authority (ILEA) was a local authority created on the abolition of the London County Council (LCC) in 1965. It had almost exactly the same boundaries as the LCC, and took over the LCC's education functions (education in outer London, which had been outside the LCC area, was assigned to the London Boroughs). ILEA was initially a special committee of the Greater London Council, but became an independent local authority when the GLC was abolished in 1986. ILEA itself was abolished in 1990, and its functions were passed to the boroughs. The abolition of ILEA by a Conservative government has been seen as the effect of the polarisation of politics at this time.[1]

ILEA had a Labour majority for much of its life, and was generally seen as gay-friendly, for instance appointing Paul Patrick as an advisor for equal opportunities in Expressive Arts. In 1987 ILEA's Learning Resources Branch produced 'A different story; First Feelings' in which a group of lesbian and gay young people discussed their experiences of growing up gay. The film was produced and directed by Sandy Andrews. ILEA held a copy of Jenny lives with Eric and Martin (for lending to teachers, not issued to children) and this was taken up by the press in the media hysteria leading to the passing of Section 28.[2]