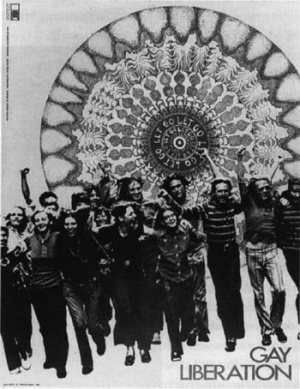 In the United Kingdom the Gay Liberation Front (GLF) had its first meeting in the basement of the London School of Economics on 13 October 1970. Bob Mellors and Aubrey Walter had seen the effect of the GLF in the United States and created a parallel movement based on revolutionary politics and alternative lifestyle.

By 1971 the UK GLF was recognized as a political movement in the national press, holding weekly meetings of 200 to 300 people. The GLF Manifesto was published, and a series of high-profile direct actions, were carried out, such as the disruption of the launch of the Church-based morality campaign, Festival of Light.

We do not intend to ask for anything. We intend to stand firm and assert our basic rights. If this involves violence, it will not be we who initiate this, but those who attempt to stand in our way to freedom.
— GLF Manifesto, 1971

The disruption of the opening of the 1971 Festival of Light was the best organised GLF action. The Festival of Light was organised by Mary Whitehouse at Methodist Central Hall, and included Cliff Richard and Malcolm Muggeridge. Groups of GLF members in drag invaded and spontaneously kissed each other; others released mice, sounded horns and unveiled banners, and a contingent dressed as workmen obtained access to the basement and shut off the lights.

Easter 1972 saw the Gay Lib annual conference held in the Guild of Undergraduates Union (students union) building at the University of Birmingham.

By 1974 internal disagreements and lead to the movement splintering. Organisations that span off from the movement included the London Lesbian and Gay Switchboard, Gay News and Icebreakers. The GLF Information Service continued for a few further years providing gay related resources. GLF branches had been set up in some other British cities (eg Bristol, Leeds, Bradford) and some survived for a few years longer.

The papers of the GLF are among the Hall-Carpenter Archives.

Several members of the GLF including Peter Tatchell continued their campaigning beyond the 1970s under the banner of OutRage! which still exists today, using similar tactics such as 'zaps' and performance protest to attract a significant level of media interest and controversy. It was at this point the emergence of a divide within the gay activist movement occurred mainly due to a difference in ideologies, after which a number of groups including Organisation for Lesbian and Gay Action (OLGA), Stonewall Equality Limited (which focused on lobby tactics), the Lesbian Avengers and OutRage! co-existed.

A brief history of the Gay Liberation Front, 1970-73
http://libcom.org/library/brief-history-gay-liberation-front-1970-73
Retrieved from ‘https://lgbthistoryuk.org/w/index.php?title=Gay_Liberation_Front&oldid=45461’
Categories: