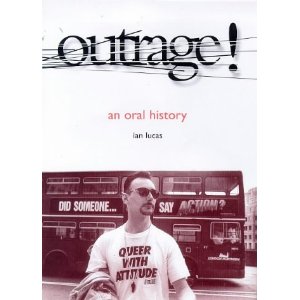 OutRage! is a British LGBT rights group that was formed to fight for equal rights of LGBT people. It has at times been criticised for outing individuals who wanted to keep their homosexuality secret and for being extremist; members have been arrested in the course of some OutRage! actions. Membership has declined from its early 1990s heyday, though OutRage! remains active.

The group was formed at a meeting on 10 May 1990, called after the murder of gay actor Michael Boothe (which occurred on the previous 30 April). There were four principal founders including Peter Tatchell. Between 40 and 60 people attended the first meeting, organised by Keith Alcorn, Chris Woods and Simon Watney, including many who had been active in the Gay Liberation Front and other campaigns.

A second meeting, this time in public, was held on 24 May. Alcorn came up with the name and Tatchell wrote the first draft of what became the Statement of Aims. Michael Burgess was elected with another man as joint treasurer as the first officers. The first OutRage! action was on 7 June at Hyde Park Public Toilets to protest against Metropolitan Police entrapment of gay men cruising, and attracted some media attention. OLGA offered the group office space at its base at the London Lesbian and Gay Centre, and regular fundraising was set up, selling t-shirts with the Outrage! logo. In September 1990 the group organised a "kiss-in" at Piccadilly Circus to protest against arrests of gay men for kissing in public. One member, identified as an actor called Richard, climbed up and kissed the statue of Anteros.

From January 1991 the group established a series of "affinity, focus and caucus groups", which took on specific aspects of the group's remit. They were given intentionally obscene and insulting names: the Policing Intelligence Group (PIG), the Whores of Babylon (tacking religious homophobia), Perverts Undermining State Scrutiny (PUSSY - tackling censorship), QUeers Asserting the Right to Ride Every Line Safely (QUARRELS - on safety on London Underground), Expanding The Non-Indigenous Contingent (ETHNIC), and Lesbians Answer Back In Anger (LABIA). To go along with these names, the financial team adopted the name Queer Accountants Never Go Out (QUANGO).

OutRage! also helped begin in 1991, with other London-based LGBT groups, the London Lesbian and Gay Policing Initiative, a process which ultimately led the Metropolitan Police to begin to take seriously homophobic attacks, and to address the needs of its own LGBT officers.