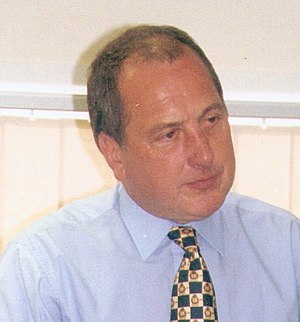 Ron Davies was born in Machen in the Rhymney Valley in Monmouthshire, and served as a councilor for Machen and then for Rhymney valley. He worked as a teacher, and was elected as the Labour MP for Caerphilly in 1983. In 1997 he was appointed Secretary of State for Wales. Later that year he led the successful campaign for a "yes" vote in the referendum on Welsh devolution (reversing the result of the previous referendum in 1979).

Following the Government of Wales Act 1998, he was appointed the Labour candidate for First Secretary of the Welsh Assembly. However a month later he resigned this post and as Welsh Secretary, following what he described as a "moment of madness": he had met a man at a gay cruising area on Clapham Common and been mugged at knifepoint.[1] He denied that this had anything to do with sex or drugs, but later admitted that he was bisexual, and was receiving treatment for a personality disorder which led him to seek out risky situations.

In 1999 Davies was elected as Assembly member for Caerphilly in the first elections to the new Welsh Assembly. He stood down from Parliament at the 2001 general election.

In 2003 The Sun published photographs of him leaving a gay cruising spot off the M4 near Bath. He at first denied being there, and subsequently claimed to have been watching badgers. However he was forced by the Labour party to resign as a candidate in the forthcoming Welsh Assembly election.[2]

In 2004 he resigned from the Labour Party; he subsequently supported the short-lived Forward Wales Party and then Plaid Cymru. In 2008 he was elected as an independent candidate for Bedwas, Trethomas and Machen.