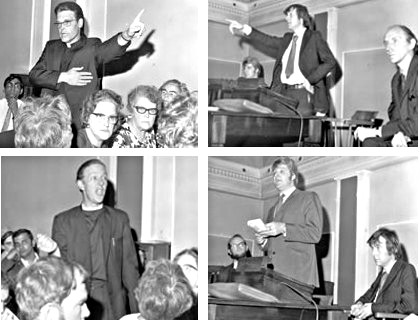 Leading members of CHE, including Allan Horsfall and Ray Gosling had been promoting the Esquire Clubs project to create club facilities to be run by and for gay men and lesbians, inspired by the example of COC in Holland and by the model of the traditional English Working Men’s Clubs that had been a feature of many northern industrial towns.

When the site of a former Co-op cafe in Burnley became available, plans were drawn up to establish such a club in the town. There followed a heated debate in Burnley Council, which discovered to its dismay that it had no powers to prevent it, and sought unsuccessfully for a change in the law to enable gay clubs to be banned. Public opposition was whipped up in the press led by two local Catholic priests.

The CHE Executive decided to call an open public meeting to confront the opposition, an occasion which has now gone down in gay history.

The meeting was co-sponsored by the National Council for Civil Liberty. Manchester students handed out leaflets headed “Homosexuals and Civil Liberty” in the town centre, in an attempt to broaden the topic beyond the clubs issue. The meeting itself in Burnley Public Library on 30 July 1971 was attended by over 250 people including the two priests leading the opposition. Police stood at the back of the hall and a police van waited outside; a group of 15 skinheads turned up and were escorted into the meeting after being asked to remove their boots and leave them at the door. A party of GLF supporters organised by CHE’s Glenys Parry travelled up from London, but most of those attending were locals who were assumed to be hostile to the plans. As the meeting progressed, however, and Ray Gosling who was in the chair, invited contributions from the floor, the tone changed. Andrew Lumsden invited any gay people in the audience to stand up to declare themselves and about two-thirds did so. And in a very moving intervention a blind woman said that she felt sickened by the intolerance shown by those who claimed to be Christian, and, addressing the priests directly, said that she believed her gay son who had committed suicide would still be alive if there had been such a club for him to go to.

In the end the plans for the club never went ahead. CHE’s local groups grew up in a less formal way, but still provided a network of support and encouragement for lesbians and gay men who came together to develop the ideas and campaigns that have contributed to today’s out and proud gay community. But the Burnley meeting was reported in the national as well as the local press, giving rise to the first of CHE’s complaints to the Press Council. It also gave an enormous boost to CHE’s public profile and its sense of self-confidence.

As part of LGBT History Month 2014 a celebration event was held on 15 February 2014 at Towneley Hall Museum in Burnley; a number of past and present CHE members took part to recall and celebrate the 1971 meeting.

The celebration was organised by Paul Fairweather, co-ordinator of the Burnley Hidden Histories Project, and included talks by Michael Steed, who had spoken for the CHE Executive at the meeting in 1971, and by Peter Scott-Presland, who has re-searched the background details of the story as part of his work on the history of CHE.

The celebration concluded with a performance by local teenagers of a short piece that they had written to illustrate the continuing difficulties faced by young people coming out. It underlined the relevance of past campaigns for the present, and the importance of preserving the history of past struggles.

The event has been dramatised as The Burnley Buggers' Ball by Stephen M Hornby for LGBT History Month 2017.

Partly based on an article by Nick Billingham in the CHE Annual Report, 2013–2014.