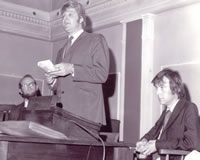 He was one of the team hoping to set up an Esquire Club in Burnley in 1970, and was described as "Northern Convenor of the Committee for Homosexual Equality".[2] He was one of the speakers at the meeting in Burnley Library and is played by Dean Michael Gregory in The Burnley Buggers' Ball.

In 1973 he acted as a link man between Blackburn’s gay community and the police in connection with the murder of John Kirby.[3]

He may later have moved to other pubs in Blackburn:

"Ken had the Wheatsheaf on Mincing Lane for a while and then The Adelphi on the boulevard."[4]