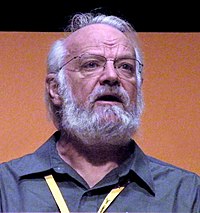 Michael Steed in 2012
Michael Steed (born 1940) is a psephologist, political scientist, broadcaster, activist and Liberal Democrat politician. He has written extensively on parties and elections.

Michael Steed was born in Kent, where his father was a farmer. He was educated at St Lawrence College, Ramsgate and at Corpus Christi College, Cambridge. In 1960 the South African authorities refused him entry to Sharpeville to deliver food aid to victims of the Sharpeville shootings.[1]

From 1963 to 1965 he undertook postgraduate research at Nuffield College, Oxford, under Dr David Butler. At the same time he was active in the Young Liberals, particularly on the issue of apartheid in South Africa.[2] He became national Vice-Chairman of the Young Liberals.

In 1966 he became Lecturer in Government at Manchester University, a post he held for many years until taking early retirement through ill health. As a psephologist he became a specialist in the detailed analysis of election results from a sociological point of view, for many years providing media such as The Observer and The Economist with texts making such complexities as "percentage swing" accessible to the lay reader.[3] In the later 1960s and throughout the 1970s he made regular television appearances on "election night" programmes, often at the side of Bob McKenzie, who popularised the "swingometer" based on the concept of swing devised by David Butler.[4] Steed was to develop a more complex formula for calculating swing, sometimes known among psephologists as "Steed swing" to differentiate it from "Butler swing".

From 1964 until 2005, Steed - latterly in conjunction with John Curtice - was responsible for the statistical analysis in David Butler's regular Nuffield election studies entitled "The British General Election of ...".[5][6]

He is currently Honorary Lecturer in Politics and International Relations at the University of Kent. He has also been Senior Research Fellow of the Federal Trust. He is a Trustee of the Arthur McDougall Fund and of the Canterbury Commemoration Society, and a Vice-President of the Electoral Reform Society.

Steed was a leading member of the "radical" wing of the Liberal Party which in the late 1960s and 1970s found itself at odds with the parliamentary party and its leader Jeremy Thorpe over a number of issues. In particular, Steed and his colleagues felt that "the party must shift attention away from personalities to a wide-ranging debate about ideology, principles and policies".[7][8] He contributed several articles to the radical monthly, New Outlook. For a time he was an elected member of the Party's national executive.

Michael Steed has always been an ardent pro-European, and his study of parties and elections soon came to embrace continental as well as UK politics. [9] In 1969 he called for a common European currency.[10]

At the 1971 Liberal Assembly, he successfully moved the major pro-European resolution, noting however that the then EEC, in which decisions were taken by "a secret cabal", must be made more democratic. National sovereignty, he argued, would "die away as a European democracy of widely diffused power was created and exercised at all levels" in "a close political union of the people of Europe".[11] [12]

Michael Steed consistently called for wide-ranging constitutional reform, including devolution all round, with elected regional governments, a more proportional election system, and the abolition of a Prime Minister's right to dissolve Parliament on a whim.[13] The last of this list of objectives was finally achieved by the Fixed Term Parliament Act passed in 2011.[14]

In 1975, with his former CHE colleague Paul Temperton, he founded Northern Democrat, a magazine calling for democratic regional government.[19][20] This later developed into the Campaign for the North, an all-party group pressing for devolution for the English regions as well as Scotland and Wales, with Steed as Chairman and Temperton as Director, using funding from the Rowntree Trust.[21] [22]

In 1976 Michael Steed designed the new system for the election of the Leader of the Liberal Party.[23]

In retirement, Michael Steed has returned to his native East Kent, where he remains active in local Liberal Democrat politics. In July 2008 he was elected to Canterbury City Council.

In 2012, Michael Steed was elected to the Council of the Social Liberal Forum.[25]

For many years Michael Steed was a leading light in the Campaign for Homosexual Equality. He became chairman of the organisation in succession to Allan Horsfall, and subsequently had other roles on the Executive Committee, including Treasurer. At a time when there was still great hostility to gay rights, he spoke out at public meetings, including an acrimonious one in Burnley in 1971 over the proposed establishment of a gay club, at which he shared the platform with Ray Gosling. This meeting has come to be seen as a watershed in the emergence of a national grass-roots gay rights movement in Britain.[26]