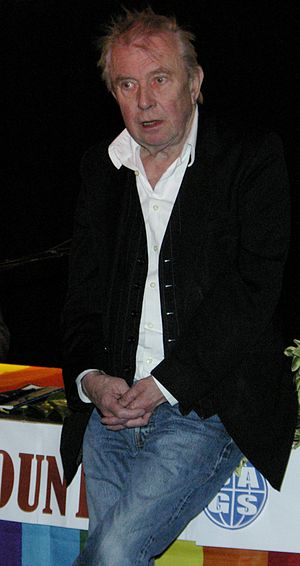 Ray Gosling, speaking at The Brief Encounter (Croydon), 2 December 2008
Ray Gosling (1939–2013) was a journalist, broadcaster, and gay rights activist, and one of the founders of the Campaign for Homosexual Equality.

Ray Gosling was born in Weston Favell, Northampton[1] in 1939.[2][3] He went to Northampton Grammar School, briefly worked as a railway signalman, and went on to the University of Leicester, but dropped out to become the manager of a band. He worked in a factory in London and as a youth worker in Leicester, but most of his life was spent in Nottingham.[3][4] His book Personal Copy: A memoir of the 60s, published 1980,[5] is a vivid description of his time in Leicester, running a youth group and trying to avoid the wholesale demolition of the St Anns area, where there were still many sound and valued houses amongst the slums.

His radio career started when he was interviewed as a campaigner for tenants’ rights in Nottingham. He was then commissioned to record a series of talks, mostly interviews with what were called “ordinary people”, broadcast during intermissions of classical musical recitals on BBC radio.[2]

Over the years Ray Gosling wrote and presented more than a hundred television documentaries, as well as several hundred radio documentaries. In the 1960s and 1970s he was one of the best known faces in television documentary programming. He hosted a weekly North West regional programme on Granada TV, On Site, in which members of the public, in a different town each week, confronted officialdom with their concerns and complaints. His 1974 Granada series Gosling’s Travels was praised by the Sunday Telegraph and compared to documentaries by John Betjeman and Ian Nairn. He specialised in "the sideways look at such eclectic and quintessentially British institutions as the working classes... and faded seaside towns, the minutiae of life."[4]

In many of his documentaries on BBC Radio he used his distinctively quirky writing style to point up the rich diversity of people and places in Britain. Among his best-remembered radio programmes were personal portraits of a series of different towns.

In 1982 he wrote and narrated an episode of the BBC television series Great Little Railways, featuring northern Portugal. His television documentaries also included Granada TV's The Human Jigsaw in 1984, and he narrated a series about football supporters, The People's Game.[6]

Ray was initially sceptical about the need for homosexual law reform, but changed his mind when an acquaintance was sent to prison;[7] he thereupon became an active supporter of the North West Committee for Homosexual Law Reform which later became the Campaign for Homosexual Equality.

An early CHE project was Esquire Clubs, aiming to set up clubs for gay people in various towns. Ray was unable to persuade friends in his home town of Nottingham to help set up a club there, and spent a lot of time visiting other towns to promote the idea.

"I was always doing meetings. Once, twice a week. Wolverhampton, Bournemouth, Southampton, Norwich. All meetings of gay people. And they would all be very enthusiastic to begin with. …. When they’d talked about it a little bit, and you wanted their name on the committee, because you wanted local committees, they all started to pull out."[8]

In 1971 there seemed to be a real chance to get a club going in Burnley. Faced with considerable local opposition, CHE organised a public meeting in Burnley library with Ray in the chair. That there was no violence was largely due to Ray's chairmanship; he was praised in the Express and News report of the meeting for maintaining order "precarious at times".[9]

Ray's background in grass-roots activism chimed with CHE's stated aim to forge a democratic mass movement in which gay people were encouraged to take control of their own lives and fight for their rights. This was in contrast to the London-based Homosexual Law Reform Society, which was seen as "top-down", metropolitan, somewhat elitist, and not run by gay people themselves (or not ostensibly so: in fact, HLRS founder A E Dyson and long-time HLRS Secretary Antony Grey were both gay, but never said so at the time). At a CHE rally in Trafalgar Square, on 23 November 1975, Ray said: "Last time it was done by an elite, who did it by stealth ... This time it has to be done by us, brothers and sisters".[10]

In later years Ray, with Allan Horsfall, ran Gay Monitor, seeking justice for men wrongly accused of sexual abuse. "We've watched, supported and sometimes advised men caught up in appalling prosecutions during recent and ongoing current times in Lancashire – but we're certain similar is going on all over the country."[11]

During the 1990s, Ray's professional fortunes waned, and his long-term partner Bryn Allsop was diagnosed with pancreatic cancer. Gosling nursed him until his death in late 1999.[6] Following Bryn’s death, Ray found it difficult to cope: failure to pay off a small debt led to mounting financial difficulties and he was made bankrupt.[3][12]

In 2000 he returned to television in a series of documentaries about his personal life, including his bankruptcy.[3] This led to him being taken on by BBC East Midlands in 2004 as a regular presenter on Inside Out, where he reported in his own individual style. His first film for Inside Out revisited his first BBC TV documentary, Two Town Mad, comparing Leicester and Nottingham, and he went back to the places and the people in the original film.[13]

In 2011 he confessed on television to having used a pillow, many years before, to suffocate a former lover who had been dying in terrible pain from AIDS. He was arrested on suspicion of murder, but it was established that Ray had been out of the country when the man died; he was later given a suspended sentence for wasting police time.

The value of Gosling's work was recognised by Nottingham Trent University in 2005, when it stepped in to save "an amazing treasure trove of groundbreaking TV and radio work which was in danger of being lost forever". The archive, including films, tapes, scripts, cuttings and background notes providing perspective on 40 years of social history, is now safely preserved within the School of Arts and Humanities.

In an interview with LeftLion magazine[18] in August 2013 Ray stated that he had planned on writing his memoirs for a few years but had never quite got round to doing it. "Life is for living, not for writing." He also talked about his lifelong relationship with alcohol: "I've been drinking since I was twelve. I drink brandy and wine now. In those days I drank ten pints a night. There were fifty pubs in my St Anns. I'd have a drink in every one."

Ray Gosling died in November 2013, aged 74.[19] He continued to be an active member of CHE, and a Vice-President, until his death, and several times came down to London to put in an appearance at a CHE quarterly meeting or AGM.[20]