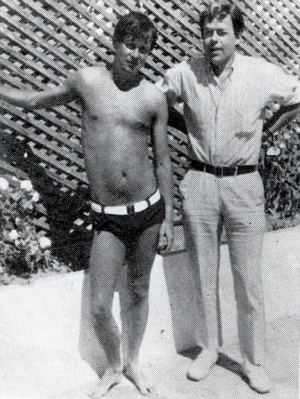 Joe Orton (left) and Kenneth Halliwell
Kenneth Halliwell (1926–1967) was an actor, writer, and artist. He was the partner of Joe Orton, whom he murdered in 1967 before committing suicide.

Halliwell was born in Bebington in the Wirral. In 1944 he registered as a conscientious objector and was sent to work as a coal miner. After the war he became an actor, and studied at RADA from 1949.

In 1951 he met Joe Orton, a fellow RADA student, and they formed a relationship. In 1959 they both began stealing and defacing library books, for which they were sent to prison in 1962.

The relationship came under strain with Orton's success as a playwright. on 9 August 1967 Halliwell killed Orton with hammer blows to the head and then took an overdose of sleeping pills.