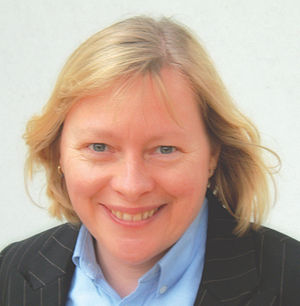 Angela Eagle
Angela Eagle (born in Bridlington, 17 February 1961) is a British Labour politician, who has been the MP for Wallasey since 1992. She served as the Minister of State for Pensions and Ageing Society from June 2009 until May 2010. Eagle was elected to the Shadow Cabinet in October 2010 and was appointed by Ed Miliband to be Shadow Chief Secretary to the Treasury. On 7 October 2011, she was appointed Shadow Leader of the House of Commons when Miliband reshuffled his Shadow Cabinet.

Eagle was joint winner of the British Girls' Under-18 chess championship in 1976.

She gained the distinction of becoming the British Parliament's first lesbian member by coming out in September 1997 in an interview with The Observer. Maureen Colquhoun, an earlier lesbian MP, did not declare her sexuality until after she left Parliament. The first out lesbian MP at the time of election is Margot James.

In September 2008, Eagle entered into a civil partnership with Maria Exall.

Eagle was joined in the House of Commons at the 1997 general election by her twin sister, Maria Eagle; they thus became the first set of twins to sit in the House. She and her sister are currently the only pair of sisters in the Commons. She was ranked number 68 in The Independent on Sunday's Pink List of the 101 most influential gay men and women in Britain 2011, 11 in the World Pride Power List 2012, and 37 in the World Pride Power List 2013.

Based on a Wikipedia Article.