From LGBT Archive
(Redirected from The Coleherne)
Jump to: navigation, search 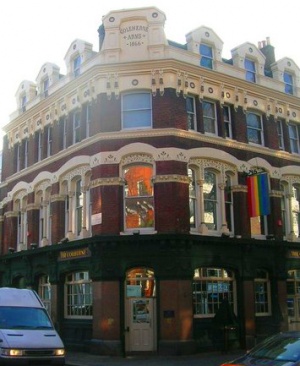 The Coleherne
The Coleherne, on the corner of Coleherne Road and Old Brompton Road in Earls Court, was one of London's best-known gay pubs, catering amongst others for the leather scene.

It opened in 1866 and had a long history of attracting a bohemian clientele before becoming known as a gay pub. Originally it was segregated into two bars, one for the straight crowd and one for the gay community, at a time when homosexuality was illegal. In the 1970s it became a notorious leather bar, with blacked-out windows, attracting an international crowd including Freddie Mercury, Kenny Everett, Rudolf Nureyev, and Anthony Perkins. Leather men wearing chaps and leather jackets with key chains and colour-coded handkerchiefs formed about half the clientele. The Coleherne was known internationally as a leather bar by 1965. The gay community flourished in Earls Court and many international tourists joined the locals.

In 1972 Coleherne pub goers, angry at the politicisation of gay sex, lifestyle and position in society by GLF, pelted passing parade goers with bottles.[1]

American author Armistead Maupin included references to the Coleherne in his Tales of the City book Babycakes. It is referred to in the lyrics of "Hanging Around" by The Stranglers.

The Coleherne was infamous as the stalking ground for three separate serial killers from the 1970s to 1990s: Dennis Nilsen, Michael Lupo and Colin Ireland. Serial killer Colin Ireland began a series of five murders in 1993, as a New Year's resolution. Ireland, who claimed he was straight, picked up men at the Coleherne, whose colour coded handkerchiefs indicated that they were into sadomasochism and passive. Ireland took them home, restrained them and in five cases, killed them.

In the mid-1990s it sought to lighten its image with a makeover to attract a wider clientele, but to no avail. In September 2008 it was purchased by Realpubs, underwent a major refurbishment and reopened as a gastro-pub called The Pembroke.[2]