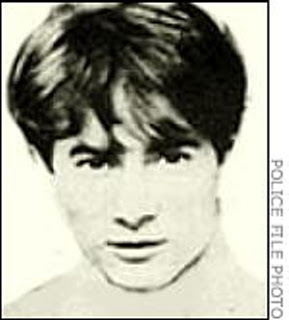 On March 15, 1986, a 37-year-old man named Alex Kasson was found murdered in a derelict flat in Kensington. The investigation did not make much progress because there were no obvious ties between killer and victim.

On April 6 that same year, Anthony Connolly, 24, was found murdered on a railway embankment in Brixton. He had been strangled to death with his own scarf. Because Connolly had been sharing a flat with a man who was HIV positive, there was a long delay between the discovery of the body and the post mortem because the coroner wanted to make sure Connolly was not himself infected with HIV. This created serious tensions between the authorities and the gay community, the latter accusing the former of dragging their heels and not taking the death of a gay man seriously enough.

Six weeks later, on May 18, Michele de Marco Lupo was arrested and charged with the murders of Connolly and Burns. Lupo, who ran a flower shop in Chelsea, was originally from Italy and was a former soldier. He apparently called himself "The Wolf Man" ("lupo" means "wolf" in Italian) and boasted of having had 4,000 lovers.

In 1987, at the Old Bailey, Lupo pleaded guilty to all charges and was given four life sentences, plus 14 years. There were investigations from a number of cities Lupo had visited in the early 1980s, such as New York, Berlin and Los Angeles, to see if he was responsible for unsolved homicides in those areas, although no such evidence of any further crimes committed by Lupo in these or any other locations came to light.

In February 1995, Lupo died in Frankland Prison, County Durham from an AIDS-related illness. He had contracted the disease shortly before his killing spree and he claimed that finding this out was what had set him off on his rampage.[1]