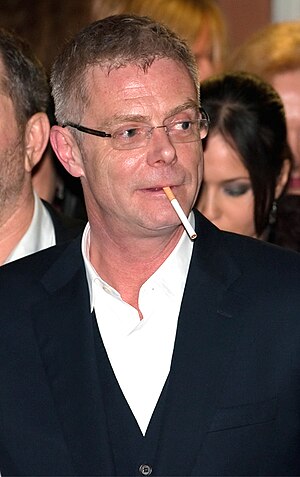 Stephen Daldry at the Berlin Film Festival 2009
Stephen Daldry, CBE (Stephen David Daldry, born 2 May 1960) is a theatre and film director and producer.

Daldry was born in Dorset.[1] The family later moved to Taunton, Somerset, where he joined a youth theatre group in Taunton,[2] and took the part of as Sandy Tyrell in Noël Coward's Hay Fever for local amateur society Taunton Thespians[3]. Aged 18 he won a Royal Air Force scholarship to the University of Sheffield to study English, where he became chairman of SuTCo (Sheffield University Theatre Company).

After graduation, he spent a year travelling through Italy, where he became a clown's apprentice. Returning to Sheffield, he became an apprentice at the Crucible Theatre from 1985 to 1988. He then trained as an actor at East 15 Acting School, London.

Daldry began his career at the Sheffield Crucible with Artistic Director where he directed many productions. He also headed many productions at the Manchester Library Theatre, Liverpool Playhouse, Stratford East, Oxford Stage, Brighton and the Edinburgh Fringe Festival. He was Artistic Director of the Royal Court Theatre from 1992-8, where he headed the £26 million development scheme. He was also Artistic Director of the Gate Theatre, London (1989–92) and the Metro Theatre Company (1984-6). He is currently on the Board of the Young and Old Vic Theatres and remains an Associate Director of the Royal Court Theatre. He was the Cameron Mackintosh Visiting Professor of Contemporary Theatre for 2002 at St Catherine's College, Oxford.

He directed Billy Elliot (2000), The Hours (2002), The Reader (2008) and Extremely Loud and Incredibly Close (2011), all of which have been nominated for Academy Awards for Best Picture or Best Director. He has also directed a stage musical adaptation of Billy Elliot, which earned him a Tony Award for Best Director of a Musical.

Although Daldry has been married since 2001 to American performance artist and magazine editor Lucy Sexton, with whom he has a daughter, Annabel Clare (born 2003),[4][5] he describes himself simply as a gay man because people prefer it ("they don't like the confusion").[6]

He was previously in a relationship with set designer Ian MacNeil for 13 years.[7] They met at an outdoor production of Alice in Wonderland in Lancaster in 1988, and after settling in a bedsit in Camberwell, began collaborating on theatrical productions.[8][9]

"Daldrey is beavering away ahead of a big 2012: his version of Jonathan Safran Foer's Extremely Loud and Incredibly Close will be released; he part of the team devising the Olympics' opening and closing ceremonies, and there are rumours he's working on a Broadway version of Disney's Dumbo."[10]